In the years 1989-2020, LfC implants helped to treat nearly 90 thousand patients with musculoskeletal & neural dysfunctions of the spine area. DERO implants were used, besides Poland, in many European countries (i.e. Germany, Ireland, Italy, Switzerland, and United Kingdom), in Central and South America, as well as in Israel. Effectively supporting the work of the surgeons: orthopedists and neurosurgeons in stabilization and prosthetics of the spine, from the skull (occipito-cervical stabilization OCAM – Occipito Cervical Anchorage Method), through the cervical, thoracic, thoracolumbar sections to the ilio-sacral region (ISaF stabilization – IlioSacral autogenous Fusion) from the anterior and posterior surgical approach. Increase of the interest from more medical centers… 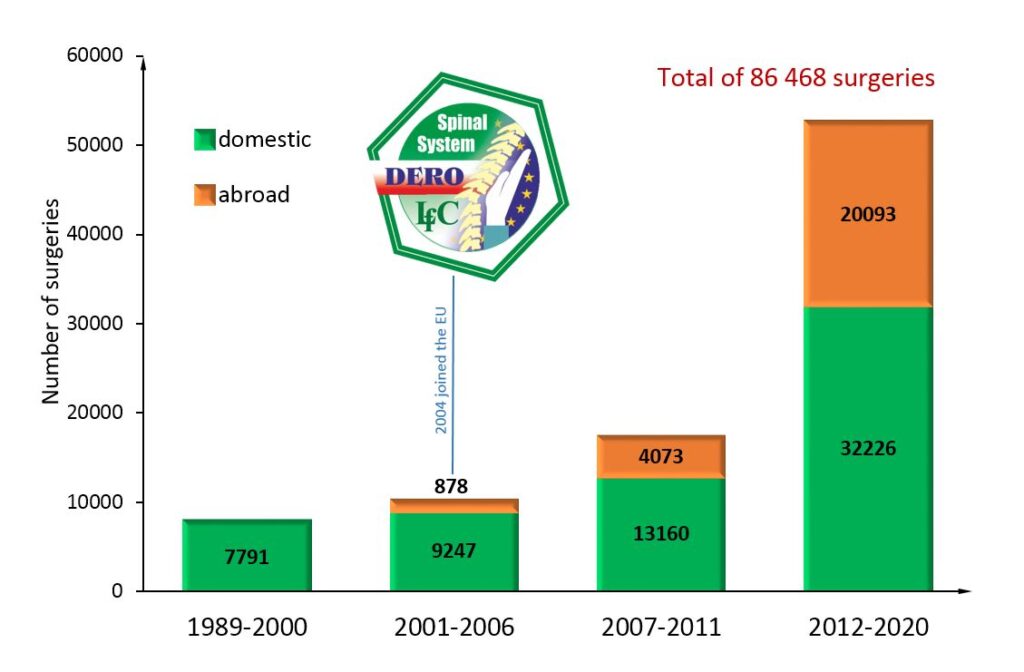 Increase of the interest from more medical centers results from the innovativity of the implants and their unique features aimed at increased surgical and therapeutic receptivity, as emphasized by doctors, but also due to the use of the latest materials and manufacturing technologies available in the world, including Electron Beam Melting (EBM) additive manufacturing. Currently, the leading DERO-LfC devices introduced to the world of spondyloimplantology are 3D printed systems of the “Ti-3D-Truss” implant family, such as CarЯLIF, s-LIF, Cs DISC, and ISaF. They show the highest growth rate in surgical applications. The unique “volcanic” surface and spatial truss structures favor fusion and accelerate healing (according to the hypothesis of L.C. – “Ivy-like mechanism of osteointegration” [1, 2]).

This year takes place a special 10th anniversary of the first use of the CarЯLIF intervertebral body implant (surgery No. 1 – Germany, 2011). CarЯLIF was the world’s first spine implant printed with EBM technology [3]; having now many followers. The special feature, apart from the truss structure and surface developed for bone overgrowth, is the plate cutting technique, self-guiding with angular positioning between the vertebral bodies thanks to carved-guides and a system of cuts blocking its position, preventing retraction.

Another device with a well-established position and development trends in clinical use are cervical discs, the so-called “cages”. Offered by LfC in two versions, PEEK (C DSIC) and “Ti-3D-Truss” (Cs DISC) sharing single universal surgical instrumentation. These implants in the years 2012-2020 achieved the greatest sales growth, both domestic and abroad. This was due to their effective patient treatment and the openness of the system allowing connection with a vertebral body prosthesis (C Spacer, easySpacer) or plate stabilization (AsCP, asCp). These devices come in a wide range of sizes and an adequate set of samplers. In the hands of a surgeon, considered as safe tools, are intended for the precise selection of an implant for the anatomical needs of practically any patient.

Two years after its introduction into the clinical practice, ISaF stabilization for the treatment of the pain in the area of the sacroiliac joint has been successfully applied to nearly 80 patients in four European countries and is planned to reach other continents in the nearest future. It is a choice, highly anticipated by the surgical community due to its original design, compression-distraction function, and system of autogenous fusion. It supports the treatment of stability disorders and degenerative changes of the I-S joint, post-injury pain conditions, and fractures (type B, according to the AO Spine classification), in gynecological/perinatal issues, as well as results of other lumbar spine fusions and/or after hip arthroplasty. The international ISaF Development Group, established in 2018, is a platform for the exchange of knowledge and clinical experience in this area.

LfC wishes to thank every DERO user for collaboration, especially during the recent year 2020, where, next to the concern over the patient and his disease, there was also a concern about Covid-19. We are full of admiration and gratitude for all the effort put into the fight for the lives and health of all of us.

We want to emphasize, that adopted in the beginning by the CEO of the company Lechosław F. Ciupik’s motto: „If we do… we do it best”, as well as a constant strive to “meet the nature”, so patients can experience “joy of healing”, are still up to date.

We wish you great satisfaction from using our product, further successes in your career, and foremost loads of health.